VAWA Is Up For Renewal: 2012 (Drunk Sluts Provision) 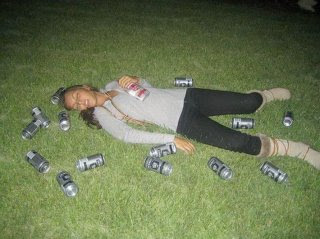 What's Wrong With the Violence Against Women Act
By: Wendy Kaminer

The above is a succinct analysis of the tyranny behind a small section of VAWA. It is only a small picture of the totalitarian tyranny enveloped in this legislation which from the beginning was designed to remove the right to due process and equal protection under law for men, separate us from our children, force us to admit guilt in order to see them again (for the moment) then use our own indictment of ourselves against us to remove us from our children forever after divorce. All of this is done on women's word alone. 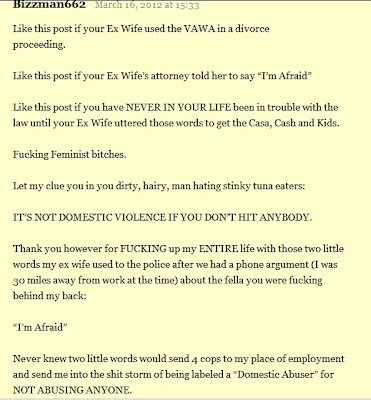 However, I'd like to talk about what can specifically be called the drunk sluts provision:

I was downtown about a year ago and saw a girl walking down the street making a fool of herself. She was well on her way to this point: 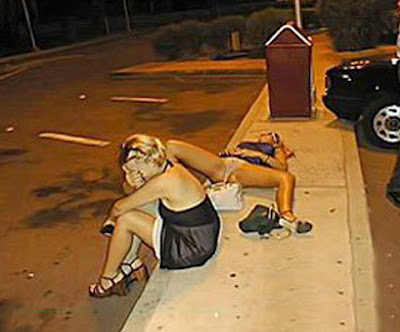 What should a man do when he sees what women have classified as a walking woman-child on her way to being this intoxicated given the legal responsibility men have for their welfare? I told her to get the f**k out of here, GO HOME and reprimanded her as an adult would to a child. At this point she is nothing but a liability to any man that gets near her, like a child. Heck, call a cab for them if you are inclined. Of course this is what feminists wanted but at least you are protecting other men from harm by a wasted bitch.

Now, let me make it clear that having sex with her when she's passed out is rape in actuality. However, after a woman has even one drink you can be charged with rape if she feels bad about it the next day. As you may have read from the syndicated article above, the burden of proof is now upon YOU. In my opinion men should deal with them as you would with the personal restraint, authority, discipline and decision making you use for a child. Women by law are men's responsibility...PERIOD. In general women have "rights" and men the responsibility, liability and risk of outcome. It's this way in any legal situation involving a woman...including marriage and thus the liability and risk of divorce.

The situation gets even more complicated when a young man is wasted along with her. In this situation you are still considered her legal guardian, sex at this point no matter what drugs or alcohol a stupid young man has taken is still his responsibility, women are your responsibility, they legislated it this way.

Don't do anything stupid, act as an adult with responsibility, you are the only gender responsible for having it. 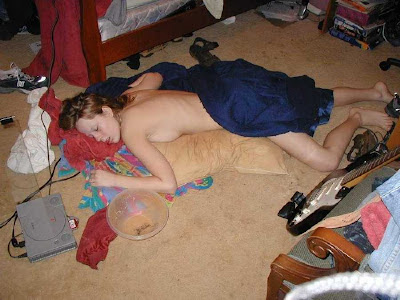 Also, never look out for women who have been drinking by making sure they get back to your place and putting them in a bed. Furthermore, I recommend not having sex with any woman-child that has been drinking and at very least if you do, do not for any reason allow her to pass out in your place. I did this once and it was a mistake. I brought a girl that had to much to my place and put her in my bed. I slept in the same bed...first thing she said to me when she woke up was OH MY GOD DID WE HAVE SEX...no no we didn't but I hope you don't give me any trouble from thinking so. Men don't need this liability and risk given the potential consequences.

I don't know how the girl in the picture above ended up in the guys room but if it were my buddy she would be brought out to the street. If it were a young college guy the below scenario is the new norm.

You come into your shared apartment and find your good friend has an intoxicated and passed out woman on his floor....

"NO! It's not f**king cool she may have been up for it before she got to this point but YOU HAVE NO IDEA WHAT SHE WILL THINK OR FEEL IN THE MORNING"

You proceed to your camping gear, grab one extra large mil-spec duffel bag and throw it at his chest and exclaim "We got to get her out of here"

"Where can we bring her dude"

"Anywhere but here, this is NOT GOOD man...this is NOT good. Help me get her into the bag and out to the car we got to get her out of here before she comes to"

"We can't leave her on the street man"

"Yes we can and we should, if she wakes up and points to you the burden of proof is on you man. You can get expelled or worse from this"

"Your right, we can't bring her to anybody or call anyone, lets dump her by Chem Hall 23 behind the bushes"

The above is the world men will have to live in now, there is no other way to protect yourself and you must look out for each other. We don't have the protection of the law and due process, nothing can be left to chance. The preservation of Justice is now in your hands alone. Do what you need to do to protect yourselves...the consequences of not doing so are dire.

"If other universities want to continue receiving federal funding they must also lower their standard of proof to the preponderance of evidence standard of 0.1% over a 50\50 chance of whether the assault occurred. If there is any doubt says student Janice Wallace, "we must aire on the side of women whether any wrong doing occurred or not. This is not about fairness it's about upholding of justice and protection of our female students. Women must be put first when it comes to safety on campus. Under Title IX we have the right to be and feel safe."

Vice President Joe Biden says: "Under Title IX, a woman is entitled to equal access to everything on a college campus. That includes being safe." Campus advocates agree, to be protected and to feel safe is a fundamental female right for which men should be aware of.
.
"In response to campus advocates and new directives from the U.S. Department of Education's Office for Civil Rights, Stanford University has lowered the evidence standard for cases of sexual misconduct from "beyond a reasonable doubt" to a "preponderance of the evidence". This move, which applied immediately and took effect during then on-going proceedings, was met with praise from students("If the new Standard of Proof bothers you, there’s an easy solution: don’t sexually assault people"), but has proved controversial among civil liberties organizations ("a shocking disregard for fair procedures on campus"), academic scholars ("a declaration of martial law against men...and a betrayal of the Title IX equity law"), and alumni ("The President’s recent decision is all the proof I need to know that the University shows little respect for the rights of students")."

Take an inside look at the frightening totalitarian campus Kangaroo Courts and associated processes that women, their political class union and their government are setting up at this very moment!HERE
Posted by Bwec at Sunday, March 25, 2012

Thia is some scary sh_t. Don't go to drunk parties and don't bring home women from bars no matter how much they beg you or want you. Women change their mind as fast as they change their panties I assume.