State of The Union Address: FATHERHOOD


You say that men are the cause of fatherless children. You say “what makes you a man isn’t just the ability to conceive a child but having the courage to raise one” Mr. President, women are 2/3 of those who divorce and abandon their families. Women are also choosing to get pregnant by uncommitted men they are not married to and who are above their station, men who are quite happy to fuck the women who are attracted to them. Women are doing this by choice and they are also getting pregnant by choice and sometimes without the consent of the man by way of birth control fraud. Our single mother birth rate is now at 52% of all births.

Mr. President, family courts alienate children from their fathers by default as a matter of course and the VAWA legislation has provisions that separate children from their fathers without due process of law. Women have default access to men’s bodies and the fruits of its labor regardless of their actions, they have default access to government husbandry welfare regardless of their actions and choices as to with who and in what instance they choose to conceive. We must make changes that expect responsibility from women by creating at least one or more liabilities for their whoredom.
To increase the amount of fathers in the home we must reform marriage and family law by ending or increasing standards on grants of no-fault divorce, mandate shared custody of children so that men can “raise a child” as you say and do so equally. By granting shared custody women will have less incentive to abandon their families. Or…. we can simply return to father-right custody altogether. When father-right custody existed, contrary to the mother-right we have now, men vary rarely divorced and abandoned their family. Even still, it is not men in the majority who do so.
We must also give men reproductive rights to abortion so that men who do not consent to fatherhood in the first place may abort from the ramifications of conception just as women can. Women may decide for the child to be fatherless in this instance or choose to abort. Sex, as it is for women, is not consent to conceive a child nor should it be for men who wish not to become fathers. We must reform VAWA to give rights to the accused and at very least give men equal protection as is granted us by The Constitution so that we may spuriously use VAWA against women in attempt to gain custody of our children in such fashion as is used against men. As is current, the women's union wants to include all citizens and non citizens with the exception of heterosexual males. If this legislation is not intended to give all citizens equal protection under law what is it's real intent? If it was a just law that provided due process, why is the women's union so adamant to exclude men from accessing the provisions of supposed justice therein?

We must decrease incentive for women to get knocked up by a man above her station by choosing to get pregnant outside of marriage by way of a man that is not committed to her. We must do this by limiting her default ability to gain resources from this man by child support as well as bar access to government subsidies if she is not married to the man she chooses to get pregnant from. If a man is not committed, and the couple not mutually consenting through the mutual agreement implied by marriage, a woman should have a liability in choosing to get pregnant by him. We must remember that pregnancy is 100% a woman's choice.

This will have exponential effect upon future father involvement as it is the case that boys who themselves grew up without a father are more likely not to commit to fatherhood themselves. Mr. President, fatherlessness creates fatherlessness and fathers create fathers.

Mr. President, studies show that boys without fathers fare much worse in overall health, education, well being and general life outcome than girls from the same home. They have lower academic achievement, higher crime rates, higher gang membership rates and suicide rates. A society of underachieving young men from fatherless homes do not make adequate husbands for the nations daughters. Strengthening fatherhood strengthens the nation’s sons and by doing so adds to the above listed exponential effect of laying the foundation for strong families and the growth of father inclusion and marriage. Strong young men make strong families. Implimenting pro fatherhood laws will both increase the quality of men to choose from in terms of boosting overall male health and thus acievement but also improve the likelihood that these men will invest in fatherhood themselves seeing as it is they had a father present in their lives.

You say you wish to “remove the financial deterrents to marriage for low income couples” What do you mean by this? I believe this would entail providing tax incentives to maintain a marriage as well as welfare reform to a system that currently provides government husbandry to single mothers leading them to choose the government over a husband and fatherhood for children and grants them default access to these provisions regardless of her behavior and her choices.

I propose by enacting the above changes to marriage law, divorce law, VAWA and by granting reproductive rights to men we can not only reduce men’s reluctance to marry but decrease women’s propensity to abandon and divorce their families in the numbers they do as well as drastically reduce the out of wedlock single mother hypergamous whore birth rate (Graph). The changes women made to law during The Cultural Revolution must be reformed so that they are once again adults with not only responsibilities for their choices but liabilities for their choices as well. By enacting these pro family, pro marriage and pro fatherhood initiatives men are more likely to be continued members of the family and included in it in the first place. Women are more likely not to conceive a child outside marriage as they would lose default access to both men's resources and that of the collective tax base by way of government welfare.

Mr. President, Please observe the graph below as well. Do you see the reset in the trend momentum of single mother births beginning in 1993? This is when welfare reform took place and government actually created incentives for women not to be supported by government husband and to get a job. With the added burden of having to work, women created relationships with men to do so for them instead, men that could potentially be fathers to their children sir. I ask you this, imagine if we created more responsibilities and liabilities for women both as to with who and in what circumstances they choose to conceive a child? I propose that giving women the responsibilities of an adult and liabilities for their choices we could further reduce the single mother birth rate and in fact possibly create a declining trend momentum in female deadbeats who divorce and abandon their family, lechery, irresponsibility and overall whoredom. We can thereby reduce fatherlessness as well. 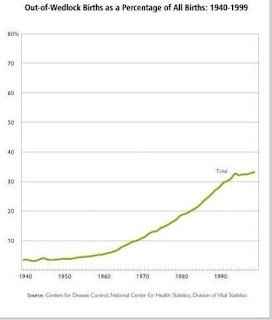 As far as an overall gender "wage gap". This figure is not calculated by "the same job" but rather is the raw wage gap measured by all men and women﻿ in the workforce. To speculate that the raw disparity in net earnings stems from discrimination is a mistake. 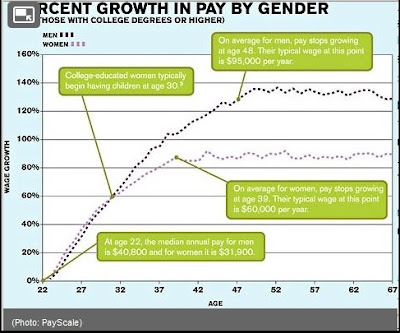 Mr. President, young women make on average 8% more than young men and this is from the calculated average from every state in the union. Time Magazine has also concluded that young women out earn their potential husbands in every state in the union. They comprise 60% of college degrees as well. A contributing factor to male underachievement as compared to women can be attributed to fatherlessness. As you can see from the graph above as well, it is only when women marry (or as is commonly the case) they decide to become a single mother and have an out of wedlock birth do they make less than men. If you want women to earn more then your proposal for govt. funded child care facilities will help that. Children must be turned over to these facilities at a young age i.e. 2-4yrs old. Their education can be determined by The People's﻿ Dept. of Education as the Soviets did. However, I believe implementing the soviet model i.e. centralized funding and government controlled educational content is not a viable solution for our families.
Posted by Bwec at Monday, February 18, 2013 4 comments: