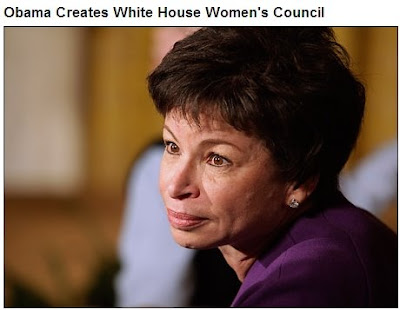 
President Obama will sign an executive order tomorrow to establish a White House Council on Women and Girls, according to an administration official familiar with the move.

The Council will be chaired by Valerie Jarrett, a senior adviser and personal friend to the president, and the day-to-day operations will be run by Tina Tchen, who is currently director of the White House Office of Public Liaison and was a major fundraiser for Obama during the campaign.

"The mission of the Council will be to provide a coordinated federal response to the challenges confronted by women and girls to ensure that all Cabinet and Cabinet-level agencies consider how their policies and programs impact women and families," reads a memo describing the move and obtained by The Fix.

The United States Government, policies, procedures and actions are subject to prior review by The Council of Women and Girls so as to ensure that any and all processes and functions of government will be reviewed in order to consider and meet the unique and special needs of women and girls and as such apart from men and boys.

The announcement is designed to coincide with the celebration of national women's history month.

"Obama and his team know that if he can maintain his 2008 margin among women in his reelection race in three years time, he will be sitting pretty. Expect then more symbolic moves like the establishment of the Council to demonstrate Obama's commitment to women and women's issues"


EXCERPT FROM OFFICIAL LETTER SENT OUT ON THE FEMINIST PARTY COMMUNICATIONS NETWORK AND PIONEERED BY N.O.W. (NATIONAL ORGANIZATION FOR WOMEN)

"This Office on Women should seek new ways to foster the full potential of tens of millions of women and girls of all races and from all walks of life -- through policies, budgeting, inter-agency coordination and special initiatives."

"It is critical that women be taken into account as your administration makes key decisions. Women need an advocate at the policy-making table whose specific responsibility is considering and weighing in on the possible impact of these decisions on women's opportunities for advancement. A Cabinet-level office is the most effective way to accomplish this goal."


EXERPT: ABRIDGED KEY POINTS FROM OBAMA'S OFFICIAL STATEMENT ON THE PURPOSE
OF THE COUNCIL FOR WOMEN AND GIRLS:
http://firstread.msnbc.msn.com/archive/2009/03/11/1832208.aspx

"One in four women still experiences domestic violence in their lifetimes."
-(Please see my post Domestic Violence for the truth from the CDC and American Psychological Association.)

"are only 17% of our Congress."
-(Women hold the vote and elect men. Women do not run for office at any level of
government nearly as much as men by their own choice not oppression)

"When these inequalities stubbornly persist in this country in this century then I think we need to ask ourselves some hard question and we need to take a hard look at where were falling short and who were leaving out and what that means for the prosperity and the vitality of our nation."

Last night I went to the pub with my brother. I overheard a man stating to his friend that his ex-wife took his house, his children and that he had to pay alimony for the rest of his life. Yes indeed the law is on the books! I told him that my brother spent $120,000 to get joint custody of his beloved child and had to pay alimony as well. That my brother was out of work for awhile and was threatened to be thrown in jail unless he came up with money to support his ex-wife. I explained that when my brother found work again he had to pay her support at 22% interest as punishment and luckily had avoided jail time. I informed him that the Men's Rights Movement is growing and gave him a link to a blog.

I found this morning to my dismay that the President has signed an executive order to create a Cabinet Level Women's Council Office or Women's Supreme High Council for the special needs of Women and Girls that reports directly to the President.

Women now obtain 60% of all college degrees meanwhile men are continually slipping scholastically at all levels of education while also loosing scholarships and funding. According to the CDC and American Psychiatric Association men constitute 50.3% of domestic violence victims and 70.7% of domestic violence victims where the man does not hit back yet no special laws such as VAWA protect them nor are their services to help them. 85% of the homeless are men. 81% of suicides are men and boys. There is a disproportionate amount of funding for women's health over men's health, govt. services and shelters. Men have little rights in divorce and child custody. Men bear the majority of risk, resource provision and social obligation to women in courtship, marriage and divorce. Women have no societal expectations but "choices" and expansion of special privileges and benefits. "My body my choice" does not extend to the stacked piles of dead 18 year old boys subject to be drafted to war. Women have more special rights, laws, women only loans, special protections, affirmative action, grants, funding, government mandated contracts to businesses that are woman owned if the other business competing for the contract is owned by a male. Today, Women own more than half the nation's wealth and by 2010 will have 60% of the national wealth. They hold the majority of the vote. Here in Colorado all jobs must be given to women first and this goes for college admissions as well. All men are expected to pay for the privledge of a woman's company in courtship, open doors, and give his life or stay behind in a state of emergency. Women are privledged beyond any other and have the gaul to have bumper stickers and tea shirts announcing their princess status. Stickers such as "Vagina..INTIMIDATED?" AND "Abortion, don't like it? Cut off your balls" etc etc etc...Misandry and anti male hate is epidemic. I wonder what this Council of Women will do now! What do they want?

Feminism has driven men, women and family apart, destroyed economic principals of free market, incentive for individual free enterprise and created women as a separate class. A systemically created elevated class structure by gender,race or religion with separate civil liberties is a violation of our founding principals as a nation.

A Cabinet post created in the highest element of government for the benefit of one gender alone, laws and representation for one gender alone or any race or religion alone will divide and destroy my nation! Such division of class in such respects is the hallmark of fascism in actual definition and in historical practice.

THIS IS WHAT I EXPECT AND SO MUCH MORE:

I believe this council is for women and girls only and serves to define women and girls, especially single mothers as a separate class away from men, boys, fathers and husbands.

I expect this council to further subsidize government husbandry to support and encourage single motherhood and divorce.

I expect it to form more affirmative action and Title IX policies that catapult women to positions of power by force. To give them preferential treatment in college admission, scholarships and funding, business ownership loans and further mandated government contracts to women owned businesses.

I expect that the disparity of 5% of the National Institute of Health budget that is spent on men and 10% is spent on women's health will continue and grow wider. Thusly, out of all 3000 medical journals listed in index medicus, medical articles cover women's health 23 to 1. Breast cancer to prostate cancer funding disparity will remain at 660%

I expect that what is being called "The Boy Crisis" in educational achievement will continue and the denigration and hindrances for opportunities and welfare of boys will continue in all realms of education, curiculum development and policy.
Women will then maintain or surpass their current 60% representation of college students and continue to aquire the vast majority of degrees.

I expect inequities in divorce and child custody laws will continue to be in women's favor and the 39% of American homes that are single mother and fatherless homes will grow higher.

I expect that although the CDC and American Psychiatric Association found that domestic violence is 50.3% committed by women and 70.7% of cases which involve men who do not initiate or hit back laws will continue to favor women and men will continue to lack any support and constitutional rights.

I expect unconstitutional VAWA laws will continue where men are jailed without question and forced to admit to guilt to gain access to their children or prove that they are not violent or a threat without due process and on accusation alone.

I expect rape shield laws to continue and no punishment for those who make false accusations.