Be A Father??? Yea Right

The below video would be seen as something from a science fiction film by our grandparents and generations past. A dystopian reality where men are no longer part of a family or the lives of their children has come to be reality in the year 2009. This change in the American family began 40 years prior. They would never have thought that the President of The United States would one day have to address the entire nation on the lack of a father in the home and in the lives of children. They never would have thought it would come to this point. Such a civilization and it's social culture are certainly worse off by this. Surely such a culture is destined for a continual decline. Indeed I am concerned about the future of my country, a country which is suffering a collapse of it's infrastructure in all realms, including the family.

I've got a proposal Mr. President, how about you allow men to be fathers! How about you support shared parenting and equal divorce law so that men don't loose their homes, their children and rights to their working labor supporting a woman who left them through no fault divorce and a child that has been taken away from him. No father should be a "visitor" of 4 days a month in a child's life. 90% of men loose their children in divorce. 70% of all divorce is initiated by women. I ask you Mr. President who is it really that is abandoning their families? Maybe the same people who entitled themselves to gain alimony and child support even in no-fault divorce,, The Women's Party the Feminists! Maybe the same people who lobbied to create no-fault divorce, The Women's Party, the Feminists. Of the 30% of all divorces that are initiated by men many if not most are of relationships where the man and woman did not have children.

So again Mr. President, according to Los Angeles divorce consultant Jayne Major: "Divorced men are often devastated by the loss of their children. It's a little known fact that in the United States men initiate only a small number of the divorces involving children."

How dare you speak to men in such a condescending way. "Take your kid to the zoo, play catch etc etc... How dare you act as if we need to teach men to love their children. How dare you... I have never been married and am not a father but I know the forces I face for Men's and Father's Rights in my country. Men have been cast out of the family structure in the largest proportions in history and now you are trying to tell men it's their fault, that fatherhood is in crisis and it's men who need to man up and solve the issue!!!? Men are fighting EVERYDAY to be fathers. The Men's and Father's Rights Movement is growing. I urge you Mr. President to go to ACFC.org and sign the shared parenting petition.

FIX FAMILY LAW AND STOP YOUR PUBLIC SERVICE ANNOUNCEMENTS BLAMING MEN FOR AMERICA'S RECORD RATE OF DISSOLVED FAMILIES, OUR 40% SINGLE WOMAN BIRTH RATE, OUR 50% DIVORCE RATE, OUR 70%+ FEMALE INITIATED DIVORCE RATE AND FATHERLESSNESS..... YOU FEMINIST, YOU ASSHOLE, HOW DARE YOU BLAME MEN AND PUT ALL THE RESPONSIBILITY TO FIX THIS ON OUR SHOULDERS!.........
FATHERS ARE DISPOSABLE WHILE FORCED TO SUPPORT WOMEN AND THEIR ESTRANGED CHILDREN REMEMBER? MR. PRESIDENT, THIS IS NOT A MALE DRIVEN PROBLEM. INCREASINGLY SO, MEN ARE RESPONDING ACCORDINGLY TO THEIR DISPOSABLITLY. 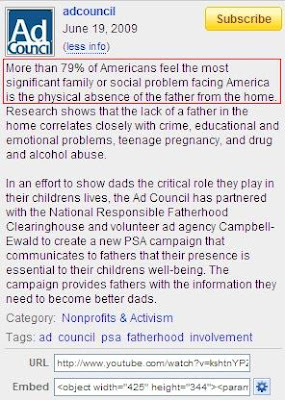 Really??? That's strange, men vary rarely abandon their families Mr. President.. In fact men only initiate 30% of all divorce and many if not most of these cases do not involve children.....


With all due respect Mr. President I just graduated college several years ago and young boys and girls are taught not only in my Women's Studies class but even in my philosophy class that men are not necessary as husbands and fathers. You see we were all taught that all that is necessary for the development of children is the extended family of grandparents, uncles and aunts and the myriad of men that come in and out of the homes of single mothers and "their" children or simply a loving gay or lesbian couple. Even I fell for it.

It was my Women's Studies class that made me realize that it was all a lie. You see, they say single motherhood is a lifestyle choice remember? What do you think brings me here to create my blog? My Women's Studies class you idiot. I was so angry at what they were teaching in my college my mother was worried about me (The court said my father is only a visitor in my life but he did not give up). I came home red in the face my president. Think real hard about the changes in our culture in the last 35-40 years. Take a good hard look at feminism. You know, the people you surround yourself with and convinced you to create the Council on Women and Girls only. Those people!!! 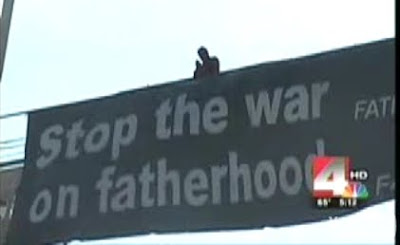 Now that the euphoria of the presidential race is over are the true colours of the man America elected becoming apparent.
And methinks they elected a mistake - a great huge mangina mistake.

Having read this I believed it was extremely enlightening.

I appreciate you taking the time and energy to put this article together.
I once again find myself spending a significant amount of
time both reading and commenting. But so what, it was still worth it!

It's a pity you don't have a donate button! I'd without
a doubt donate to this superb blog! I suppose for now i'll settle for
book-marking and adding your RSS feed to my Google account.
I look forward to new updates and will share this site with
my Facebook group. Talk soon!