Male suicide rates have tripled since 1970. This has been a victory for feminists. I implore you to view the other graphs I've published here on marriage rates, divorce rates, single mother birth rates and government husbandry welfare. These massive shifts are due to an equally massive causational force. Ask yourself what changes took place in American culture at this one point in time. How did our country change? Did we change our value system? What new laws were implemented by feminists regarding the family? How did our perceptions of marriage, husbands and fathers change? How has our perception of men and how men are supposed to fit into society changed? We must understand what has changed for males compared to females: 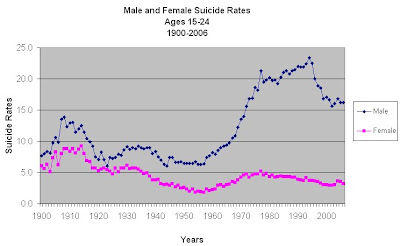 1965 was the birth of the Feminist Revolution that took place in America. It was at this point in time that male suicide which prior to this point almost exactly mirrored with symmetry the rate of women's had separated into it's own increasing trend trajectory. What changed for men and boys in relation to women and girls during this time?

Notice the reset of the upward trend momentum in 1995. This was the point where the psychological community declared suicide an epidemic. Those of you old enough to remember may recall the public service announcements and suicide hotlines that opened up. Though the attention of the psychological health community has helped men and boys and the decline in suicide is reflected in the graph it can not and has not solved the underlying CAUSES of male marginalization in all realms of society and the family. It is merely a patch for the underlying issue and not a solution.

1995, Tom Mortenson had started Opportunity and had continued to watch the decline of males. The downward curve, if anything, had grown steeper. Something big was happening. Mortenson began writing about it, and he hasn't stopped.

These days he travels often, addressing education conferences on the subject, and usually begins with slides showing boys' greater dropout rates, lower grades in high school, and general drift away from academic achievement. Then he puts up what he calls the "show stopper." It's a slide of suicide rates among boys between the ages 15 and 24. The graph shows a horrific rise beginning in the 1960s and peaking in the 1990s, when the ratio of male to female suicides exceeded six to one. The rates are the highest ever recorded for that age group.

"You can sober up any audience when you lay out the suicide data," he said. "The room tends to go quiet. The audience is staring at figures showing young males giving up on life at the very beginning of life, and they understand that something dangerous is happening in our culture." In recent years several studies by the U.S. Department of Education, the American Council on Education, and others have confirmed Mortenson's findings.

Not that I advocate it but I think if more of the increasing amount of men and boys that are killing themselves were to kill others first society might start to try and help. The main demographic being boys 15-24 puts them at school and college age so most likely their targets would occur in school shootings but a mass shooting of a general public target is also a possibility.

Again, I am not advocating murder but I do think it would bring attention to a class of people who are not cared for or as highly valued as women and girls and perhaps never will be. Will it change anything...no probably not. However, this drive to kill others seems to have the same impetus behind the increasing amount of school shootings and suicide by boys. I believe men and boys recognize that no one cares about our welfare. Killing others is a desperate attempt to kill something of value as it is in their own view that their own lives are meaningless to a society who shits upon them in disregard.

I don't know if the Council on Women and Girls can help but maybe a Council on Men and Boys could if they were to create one. I think the first step would be to create the nations first office on the health of men and boys and if we are lucky a Council as Women and girls have.

THE BOYS BELOW ARE THE COLUMBINE BOYS WHO COMMITTED SUICIDE. THE PROBLEM IS THAT THE TRIPLING OF MALE SUICIDE DOES NOT GET ATTENTION AS MOST BOYS DON'T KILL OTHERS AND TAKE OTHERS LIVES FIRST AS THESE BOYS DID.

I THINK MORE BOYS NEED TO FIND WAYS TO GET SOMEONE TO HELP THEM AND OTHER MEN AND BOYS. NOT MURDER BUT I THINK MANY BOYS SEE NO OTHER WAY. SOME MEN ARE STARTING TO KILL OTHERS FIRST WHICH IS AN IMPORTANT CHANGE THAT IS IN FACT BRINGING ATTENTION TO THE SUBJECT. MASS SHOOTINGS HAVE BEEN ON A DRASTIC RISE.

SADLY ENOUGH I THINK IT IS MAINLY THAT OTHERS HAVE BEEN KILLED AND NOT A CONCERN FOR MEN AND BOYS THOUGH. FEMINISM IS A SELF FULFILLING IDEOLOGY AND TENDS TO REAP WHAT IS SOWS FROM MEN WHICH IS USED TO FURTHER THE FEMINIST DEMONIZATION OF MEN. IT IS A DOWNWARD SPIRAL AND AN ISSUE WHICH COMPOUNDS ON ITSELF THE MORE MALE HEALTH DECLINES THE MORE WE ARE ANGRY AT MEN AND BOYS AND DEMONIZE MASCULINITY AS THE CULPRIT. I DON'T KNOW IF ANYONE REMEMBERS BUT BOYS AND MEN NEVER, EVER PERFORMED MASS SHOOTINGS...DO YOU REMEMBER? IT ALL BEGAN ABOUT 1990 WHEN THIS ONE INDICATOR OF THE DECLINE OF MALE HEALTH BEGAN TO PRESENT ITSELF. IT WILL MOST CERTAINLY CONTINUE TO GET WORSE!!! 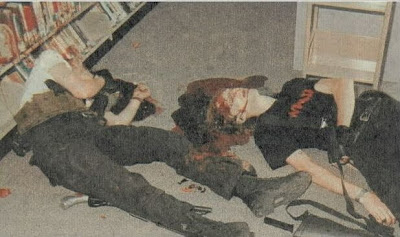 One of the most common predictors of male suicide is divorce and the loss of a man's children.

According to Los Angeles divorce consultant Jayne Major: "Divorced men are often devastated by the loss of their children. It's a little known fact that in the United States men initiate only a small number of the divorces involving children. Most of the men I deal with never saw their divorces coming, and they are often treated very unfairly by the family courts."

There have been a rash of father suicides directly related to divorce and mistreatment by the family courts over the past few years. For example, New York City Police Officer Martin Romanchick, a Medal of Honor recipient, hung himself after being denied access to his children and being arrested 15 times on charges brought by his ex-wife, charges the courts deemed frivolous. Massachusetts father Steven Cook, prevented from seeing his daughter by a protection order based upon unfounded allegations , committed suicide after he was jailed for calling his four-year-old daughter on the wrong day of the week.

Darrin White, a Canadian father who was stripped of the right to see his children and was about to be jailed after failing to pay a child support award tantamount to twice his take home pay, hung himself. His 14 year-old daughter Ashlee later wrote to her nation's Prime Minister, saying, "this country's justice system has robbed me of one of the most precious gifts in my life, my father."
Fathers' rights groups contend court bias plays a direct role. One divorced father committed suicide on the steps of San Diego's courthouse, another set his car afire outside Alaska's child-support office. Fathers' rights groups, joined by a few academic experts, see a common denominator in these recent bursts of rage, and ask whether America's family court system could be partly at fault by deepening the despair of many divorced men.
Posted by Bwec at Saturday, March 14, 2009

Great blog as for me. I'd like to read more about that theme. Thanx for posting that data.

In the United States, men are being treated like animals or livestock and as worker slaves. The situation is horrible in that country. The suicide rate is higher than it has ever been in any country during any period in history. I can understand why too, I wouldn't want to live there. I cannot imagine how horrible it would be to be treated the way they are treated. Men in the United States are far more likely to be in prison than in college. I believe this is what feminists always intended. When were women ever treated like that? I do not believe things w3ill get any better in the States until a massive war occurs and most of the men are killed. Then, and only then, will American women ever learn to value men. They must be made scarce.

Hello! I am sorry to read this. However, the current situation is also in result of the casual sexual attitude that began to overwhelm our media culture in which men are enormously pressured into acting "masculine" while women are encouraged to prostitute themselves. Correlation is not causation and such conclusions, although tempting, may deceive us into demonizing the opposite sex. Intellectual bravery requires humility. Nevertheless, I thank you for your gathered data and thoughts, as they provide additional insight to the increasingly soulless behavior of today's world. A world in which we do not behave as a family does but community is replaced with ther mentality of a corporation and media consumes the mind.