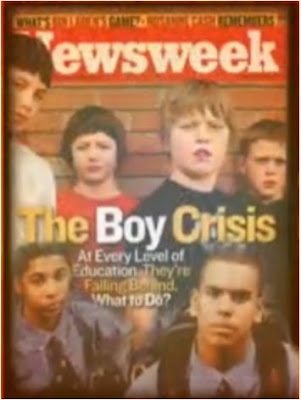 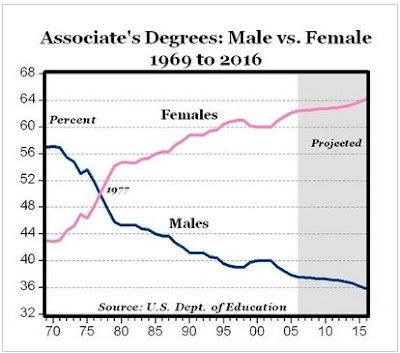 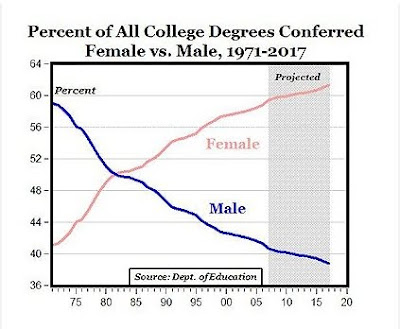 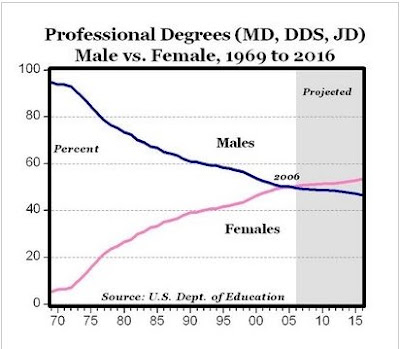 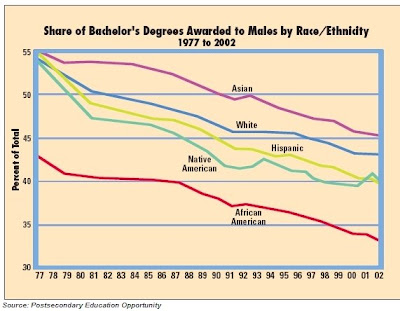 The graphs above illustrate male failure in proportion to female advancement. This is an excellent example to illustrate that the problem is systemic and subsidized and of course unnatural. The war on boys must stop.. The government just formed the Cabinet level Council of Women to subsidize the advancement and special needs of girls and women only. (Please see my blog post below) I am very concerned about this. Here in Colorado women have affirmative action and must be given admission first as their 60% representation in our colleges and attainment of the vast majority of degrees is not enough. The male must be discriminated against at all costs to allow women to advance. He must be defeated....

The American Sociological Review 2006 reports that the male disadvantage in earning a college degree is largest for those who grew up in households with a low-educated or absent father. But the findings showed that women from families with a low-educated or absent father had the biggest increase in college enrollment and graduation. Claudia Buchmann conducted the research with Thomas DiPrete, professor of sociology at Columbia University . Their results appear in the August 2006 issue of the American Sociological Review, and the February 2006 issue of Demography.

Men haven't kept up, and this might have consequences down the line. In a few years, for example, the women who populate today's colleges and universities might drastically outnumber educated men in their age groups. Women generally seek equally or higher educated marriage partners, and many experts fear that female college students will soon face a shortage of eligible bachelors.

Most experts also concur that undereducated, ill-prepared men are a net drain on society's resources. Males are three times more likely to commit suicide now than in 1970 (when second wave feminism began), and the decrease in the percentage of men in college has accompanied a clear decline in male participation in public life: in 1964, 72 percent of men voted for president, while that number today has dropped to 53 percent. Men are dropping out of society and giving up on life at a young age.

Engineering, physical science and MBA programs generally retain a male majority, even as other academic fields develop double-digit female leads. Many researchers note that the fields in which men still dominate tend to be higher-paying than those favored by women, which may account for some, but not all, of the overall wage gap. The investigation of the Obama adminsitration to expand Title IX gender parity law enforcement into science, technical and engineering classes in collges will further exacerbate the issue. These areas of academia are the only place left in which men outnumber women. This may soon change by force of gender feminist doctrine instituted as law.
Posted by Bwec at Saturday, March 14, 2009